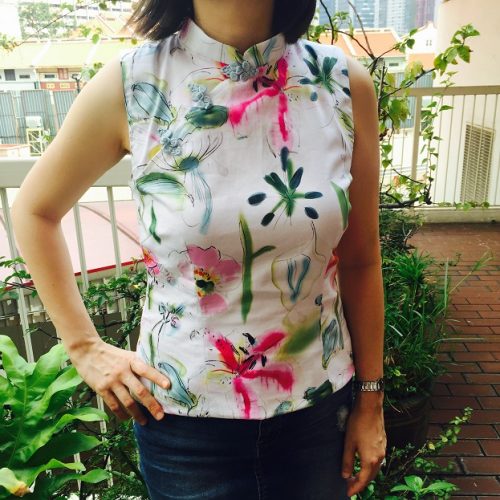 Chinese New Year is perhaps the only time in the year where you will see women of all ages donning the cheongsam, or a variation of it, in Singapore. Anticipating such a fashion trend, we too got into the cheongsam swing of things by offering two dressmaking workshops for the first time: the Fun in the Kids Cheongsam Dress and the Sassy Samfoo Top. And it was quite a hit with the ladies as well as one young father who came to sew the cheongsam dress for his 6 year-old daughter!
Riding on the heat of the cheongsam craze, we decided to find out more about the cheongsam, or qipao as it is traditionally known. It seems that the cheongsam originated from Manchus belonging to the ancient Nuzhen tribes. The qipao, or ‘banner gown’ when literally translated, grew out of the unification of the tribes under the Eight Banners System in early 17th century China. Popular with ladies of the royal family in the Qing Dynasty, the qipaos at that time were made of silk, fully-embroidered, and were often long and loose-fitting as it was a modification of the men’s changpao. The cheongsam, however, was not immediately popular with most women at that time since it resembled the men’s changpao too closely.
As time passed, the appeal of the cheongsam began to spread from Shanghai to Hong Kong, Taiwan and eventually Singapore. Variations soon emerged as a reflection of the changing values of Singapore society. From 1930s, the shorter-hem, tighter-fitting, higher-slit cheongsam was often worn in graduation photos and to work by Singaporean women as a symbol of modernity and progressiveness. When one thinks of the iconic Singapore cheongsam, the late Mrs Lee Kuan Yew comes to mind. She was almost always seen wearing a cheongsam as a mark of her Chinese identity. Today, however, the cheongsam has evolved to be a fashion statement rather than a mark of one’s ethnic roots. Influenced by Western fashion, they are often emblazoned with bright prints, paired with skirts or jeans, or are made of French or Italian lace for the bridal variety.
It is truly mind-blowing to witness the confluence of styles, cultures and time in just a single piece of outfit! No one would have thought that the humble ‘practical’ cheongsam, born out of the men’s changpao, would evolve into the fashionable pieces of today. And with so much history embedded in its seams, one can certainly expect the cheongsam to pass the test of time. So the next time you wear a cheongsam, remember that you are not just wearing any ordinary outfit but a rich piece of history and a symbol of women’s emancipation in the past!