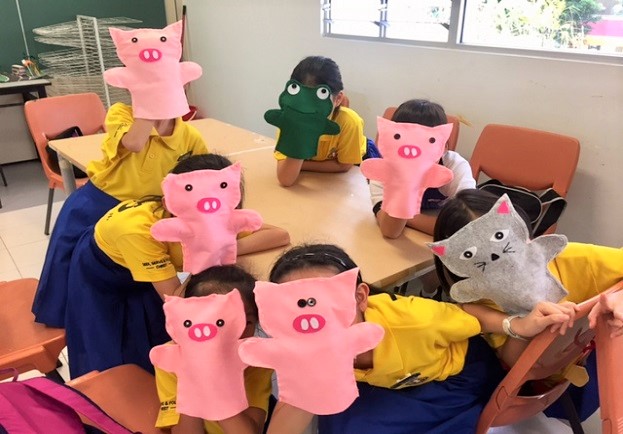 Ready, On the Mark, Get Set…HAND STITCH!

It came to us as a surprise when we received a call to teach basic hand stitching skills to primary school children from the Girls’ Brigade at Kuo Chuan Presbyterian Primary School. We had taught such an interest was long dead and gone among the younger internet-savvy generation. Hand stitching is after all a skill that requires a great amount of patience as you slowly stitch–and possibly unstitch–your way through the cloth making sure your stitches are neat and even throughout. But when the teacher-in-charge explained that she felt it was important to expose the girls to these valuable life skills, we were heartened and gratified! So with the proposal of hand stitching felt animal hand puppets, we were set to teach two hand stitching workshops at Kuo Chuan!

The minute the girls entered the classroom, they were raring to get started hand stitching. It was a challenge containing their excitement as we settled them down and issued key instructions. Nevertheless, it was a joyful atmosphere and in some ways refreshing to see them all eager to learn hand stitching, something we thought would not interest them at all. And so we got them started with the very, very basic of tying a knot at the end of a thread before sewing. Those with more nimble fingers were quick to pick it up, turning and tugging the thread to form the knot. Nevertheless, for the rest, we truly applaud them for their perseverance in their repeated attempts to tie the knot despite not being able to do so initially. With the knot firmly set in place, the girls proceeded to stitch the appliques and, finally, stitch up their entire hand puppet! The feelings of pride and achievement were certainly palpable at the end of each session as they played and paraded their hand puppets!

From this experience, we learned that it is not simply equipping them with basic sewing skills that is important but empowering them to learn something new and encouraging them to persevere despite the difficulties faced. Truth be told, hand stitching is a skill that should be picked up at a young age as your fingers are more nimble to handle the needle and thread then.  Perhaps the same reason why parents start their children on the piano at the tender age of 4 or 5 years.  We also learned that it does not require an extensive amount of work to achieve a deep sense of pride and fulfillment: a simple product that is well-done can do just that! Once the mental barrier that hand stitching is difficult was surmounted, we were amazed at how the students progressed by leaps and bounds! Besides, it was also about teamwork and helping one another out. Despite struggling to complete their own hand puppets, some of these girls showed great generosity by putting aside their own puppets to help their friends in need. We were really impressed by their selfless concern for others!

And so, we can safely conclude that hand stitching is not dead and gone but in fact very much alive! So too the spirit of giving and care for others among the younger generation today. In the short duration of two hours, we believe that they have not only acquired valuable sewing skills but important life lessons that they will carry with them through life. For us, we are glad that our presumptions were challenged and eventually overturned!